February 2018, I received an email from Jenna, her dog Theo had recently started acting strangely.  Theo also wasn’t doing well with meeting new people.  Jenna explained Theo had multiple health issues primarily stemming from his past.  Even with all Theo’s health issues Jenna fell in love and adopted him in October 2014 at 1 year 4 months.

They had been through quite a few surgeries, mishaps that required medical attention and very bad arthritis in his back left leg.  Theo had been very lucky to have Jenna come into his life.  She was his earth angel.

Over a period of time, Theo, Jenna and I had done multiple Animal Voice Sessions.  After each session, Jenna incorporated changes which Theo had indicated would help.  At the time, Jenna and Theo lived with roommates and various times other pets.  This required the roommates to also help with the changes.  Once again Theo received all the support he needed from everyone involved.

Theo’s strange behavior disappeared and he was back to being fun loving and sleeping through the night.  Animal Distance Reiki Sessions were started for Theo’s arthritis which he is still receiving multiple times a year.  Jenna sent me a video of him running and jumping trying to catch bubbles.  Theo loves the water and swimming which is very good for strengthening.

Jenna had decided the two of them were going to spend the summer visiting friends.  Deciding to be proactive, Jenna wanted to know how she could help Theo with being in strange houses.  During the Animal Voice Session, Theo was upset as he didn’t understand why I was having this conversation with him.  He thought they were getting a camper and this is where Jenna and he would be staying.  I told Jenna this.  She started laughing and said “I had been telling my friends, I should get a camper and Theo and she would travel with it”.  Theo had been in the room when she was telling her friends this.  Theo loved this idea.  It was one of their best summers.

Jenna and Theo have since moved to their own house.  Theo now has an older brother, Gordon and recently a new baby brother, Tony.  Theo is actively enjoying walking, swimming, playing.  Although gets annoyed with Tony.  Theo mentioned he needed to contain Tony and proceeded to show me a picture of his paw on Tony’s head.  When I mentioned this to Jenna, she sent me a video of Theo doing exactly what he was showing me.  Just found out today, Theo has another baby brother, cat named Ron. 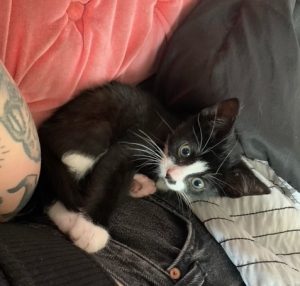 Theo is living his best life.  He found the perfect human for him and Jenna has been blessed with an amazing companion, well four of them now. Congratulations to Jenna and Theo, the work they put in has been a success for all! 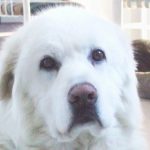